And then that happened

Hi there! I wouldn't dust off this thing except that it was hugged out of me by CMGD, a SAHM (not to be confused with SARS) who recently turned a new age (the pretty one). We celebrated her decrepitude over tortillas, which was nice. There's nothing much new to report here. I am now unemployed, my lower left leg is discolored and bleeds a lot, I'm in the process of discarding my possessions so I can move to Seattle (aka Bunnyland), I drive a white '95 Taurus, I'm in love with a Wiffle Hutt waitress who looks like Julia Stiles without the bitchy overtones, my eyesight is fading, I like 90's sitcoms, and I have trouble stringing two coherent sentences together. Why don't fish have beanbag furniture? A pizza. And which is better: bouncy or boingy? Also, I no longer personally hate every person alive.

And here is Tracy's web site because I can't count the three times people have asked me for it recently: http://www.kaplyinc.com/
Blasphemed by Grant on Wednesday, February 08, 2012 5 comments:

Long ago on one of my birthdays I finally decided that spontaneity sucks. I woke up, decided to go to a historic site, couldn't find it, went shopping for a gift, found the store had moved, then went to a restaurant that sounded interesting and discovered it closed. That night I printed maps and directions, found new places online, and did the whole thing right the next day. Preparation is good, but the key to successfully planning an event is to later claim everything happened according to your plans. So, in retrospect, here is my plan for an insightful and enjoyable Memorial Day weekend.

Thursday:
Friday:
Saturday:
Sunday:
Monday:
There - all goals achieved. I guess that means I both had fun and reflected on the lives lost in order to give me my distinctive American lifestyle.
Blasphemed by Grant on Sunday, May 29, 2011 16 comments:

I've been taking Metformin for two years, which is supposed to help control blood sugar at the expense of making one (where one = me in this case) permanently sharty. I recently cut back on my prescribed amount, from 2k mg to 1k, then quit taking it altogether when (again) my prescription ran out and my doctor's office couldn't be bothered to refill it. As a result, my stomach problems have almost completely disappeared while my blood glucose levels have remained the same. Bear in mind that I'm also injecting 82 units of Lantus (insulin) per day. Maybe the Metformin is just for amateur diabetics and doesn't help when you go pro. I'm just happy to save $8/month and to once again know the joys of using a urinal since I no longer have to crap more than pee. 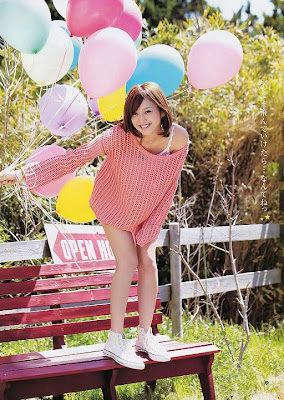 I won't bother listing her name or age because she just got engaged. Bunny is off the market. =(
Blasphemed by Grant on Wednesday, May 25, 2011 6 comments:

If this doesn't enhance your happy, you are a truly horrible person.
Direct link is here.
Blasphemed by Grant on Thursday, May 19, 2011 6 comments:

Because there are bunny pics.
Blasphemed by Grant on Thursday, May 12, 2011 No comments:

Last Sunday was a very sacred day to me, a day I shall forever remember as "after two days of vomiting and sharting and farting and only being able to hold down an English muffin and two glasses of water, finally feeling well enough to eat something but having no food since I haven't felt well enough to go to a grocery for weeks and so I went to Pappasito's for some Tex-Mex takeout and spent fifteen minutes in the parking lot trying to escape wondering why they were so busy at 3 PM on Sunday" - um, mas. Then I got home and ate my taco al carbon and replayed some of the images I had seen in my mind, the gridlocked traffic in the parking lots, the bored children waiting for a table wandering after every passing stranger, the dressed-up old women in obvious discomfort being helped in and out of cars, and I remembered - it was Dress Up and Take the Family Out to Someplace Packed and Crowded Oh What Fun Day! Some antiquated calendars still list it as Mother's Day.

I'm not against holidays. I'm all for the claims that we should remember to celebrate things on a daily basis instead of just once per year, but I still think it's nice to set aside a special time to reflect and celebrate certain events or concepts. I'm just saying that we've gotten lazy and / or stupid (where we = you) in that we've decided that every holiday must be celebrated in the same way at the same time, usually by consuming a certain product or service. Blame Corporate America all you want, but unless they're marching into your homes and forcing you to go to KFC* at gunpoint, you're a willing participant. So, next holiday, how about you actually give it some thought first, then decide to do something that is both fun AND actually celebrates the concept behind the holiday.

This public service announcement is brought to you by the foundation for Father's Day is coming and I may want another taco and I don't want to get stuck in my car again because the parking lot is full of unhappy old men mopping the sweat from their bald heads with their ties as they edge into hour two standing under the hot July sun waiting for an available table. 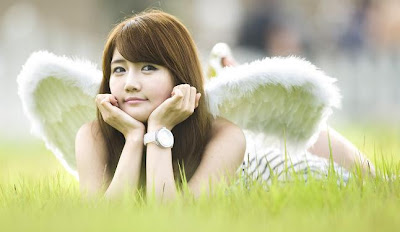 * Seriously - I once had a coupon from KFC that said "not valid on Mother's Day". Then I drove by one that day and saw the parking lot was jammed, the dining room and drive-thru were packed to capacity, and cars were lined up in the street waiting to get in. KFC? For real? Wouldn't it be easier to just give dear old mom a five dollar gift certificate and say "Thank you for not making me an even bigger emotional wreck."?
Blasphemed by Grant on Tuesday, May 10, 2011 4 comments:

I was planning something special for post #1,500, but since I hardly ever get comments these days anyway I decided to say screw it and post more bunny. I especially chose this one for her ability to make American women feel fat and old. Please meet 25yo South Korean race queen Han Ga-Eun. 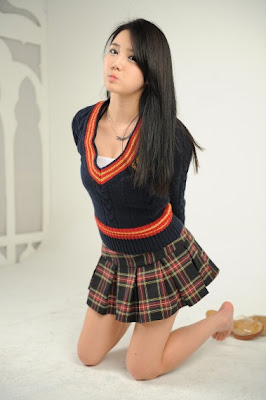 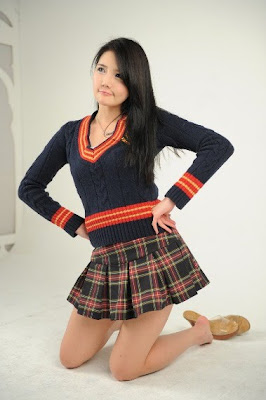